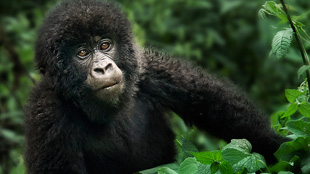 Despite paying a fee of $600 a day with no guarantee of actually seeing the wild primates, King and his group of guides had spotted not one, but two mountain gorilla troops. Their second encounter had been a resting troop of gorillas called the Rusheguras, which King watched and photographed from a safe distance for about an hour.

But nothing would prepare him for what happened the next day.

Around 6 in the morning, one of the expedition members ran into his tent to tell him that a troop of mountain gorillas was roaming through their private safari camp near the Bwindi National Park.

“Imagine our surprise and absolute amazement when we woke up the next morning...

As he sat on the path with his camera, waiting for a close-up shot of the troop, one of the baby gorillas approached King, with a massive silverback just a few feet behind.

"This baby kind of grabbed my arm in a very gentle way. I just can't tell you how gentle it was. It was like a young child touching your arm in a way that's very endearing,” King told National Geographic.

"Then it just escalated," King continued. "Instead of moving away, it went behind me and started to touch me on the shoulder and on the head in what was obviously grooming.”

The friendly troop lingered around King for about three minutes before moving on, leaving him speechless on the side of the path.

Uganda's Bwindi Impenetrable National Park is home to around 350 mountain gorillas—roughly half the number of gorillas found in the wild. Ugandan rangers are extremely fierce about protecting the animals, and although tourists are allowed to experience the gorillas up close, they are instructed to keep a distance of at least 20 feet from the animals to minimize disease transmission. (See our October 2011 Notebook, “Gorilla Warfare.”)

But that wasn’t an option for King, who has a knack for attracting adventure and thrill. In the 1970s, he made a small fortune fishing crabs in the treacherous Bering Sea, after which he founded a string of successful biotechs. (Read more about King in our December 2010 Notebook, “The Crabby Entrepreneur.”)