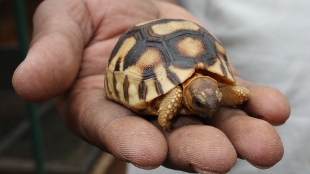 One of two baby ploughshare tortoises found in the wild.DURRELL WILDLIFE CONSERVATION TRUST

As few as 500 adult ploughshare tortoises roam the bamboo scrub of Baly Bay in north-western Madagascar. Fortunately, many more are thriving in the Durrell Wildlife Conservation Trust’s captive breeding colony. Since 1998, 65 sub-adult tortoises have been reintroduced into the wild. And now, a local field team has discovered the first progeny of those released animals.

“The importance of the discovery of the baby ploughshares cannot be over-emphasised,” Lee Durrell, the Trust’s Honorary Director, said in a press release. “They represent a beacon for the future of not only the iconic ploughshare in Madagascar but many other species whose survival relies on similar conservation breeding programmes.”

Measuring just 5 centimeters in length and weighing just 30 grams, the two babies are believed to be approximately 1 year old. The question now is will they survive....

Read more about the ploughshare tortoise’s poaching woes in this month’s “Marked for Life.”