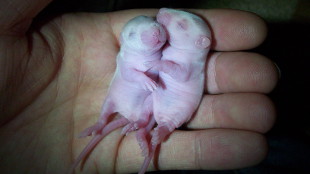 FLICKR, MITCH PONDScientists who brushed the backs of baby rats nearly 40 years ago are among the winners of this year’s Golden Goose Awards. Their work led to the finding that massage could promote the survival and growth of premature human infants.

Representative Jim Cooper (D-TN) partnered with a group of science organizations, including the American Association for the Advancement of Science (AAAS), to establish the Golden Goose Awards in 2012. The awards honor federally funded discoveries that may seem frivolous at first, but later yield important benefits to society.

In 1979, the late Saul Schanberg, a neuroscientist at Duke University, was using baby rats to study factors that influence levels of growth hormone and ornithine decarboxylase, both growth indicators. Working with graduate student Cynthia Kuhn and technician Gary Evoniuk, Schanberg was conducting experiments that required separating the pups from their mothers.

Although the animals were...

This result inspired Tiffany Martini Field, a psychologist at the University of Miami Medical School, to study the effects of massage on preterm human infants. Since that time, millions of premature babies have thrived thanks to this apparently odd discovery.

“Federally funded science frequently results in unexpected benefits to mankind,” Representative Randy Hultgren (R-IL), a member of the House Committee on Science, Space and Technology, said in a statement. “Offbeat scientific research—even massaging rats—can lead to key discoveries in our understanding of human development and improve the lives of many.” The US National Institutes of Health provided funding for both research efforts.

Kuhn, Evoniuk, and Field will receive the Golden Goose Award in a ceremony at the Library of Congress in Washington, D.C., on September 18. Schanberg died in 2009; his granddaughter, Katie Eimers, will be accepting the award on his behalf.