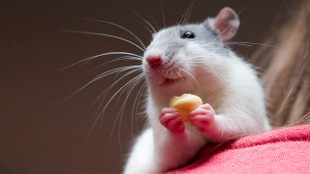 Wikimedia, AlexK100Like humans, rats can get pain relief from a placebo, according to a study published in the October issue of the journal PAIN. The findings give scientists a useful animal model with which to further investigate the mechanisms behind placebo-induced analgesia.

Researchers from the University of Florida (UF) conditioned rats to expect morphine or saltwater by injecting them with one or the other during 2 sessions in which the rats were subjected to mild thermal pain on their faces. Then, during a third session, the researchers gave both groups the saline injection, and found that around 30-40 percent of the rats that had previously received morphine showed hallmarks of placebo-induced pain relief.

“We know basic things about placebo response, but the study we did is important because now we can look at placebo response in ways that you can’t in humans due to practical and ethical issues,”...

For example, this new rodent model may provide opportunities for invasive preclinical studies to help scientists better understand placebo-induced pain relief, and perhaps lead to new ways to harness its benefits in humans.