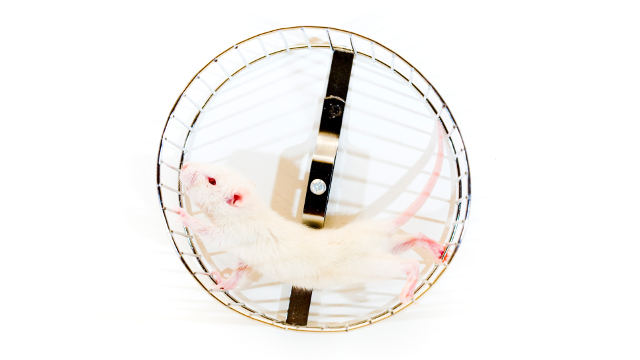 ISTOCK, ALUXUMMale rats with running wheels in their cages from a young age demonstrate improved performance on a memory task as adults, according to a study published today (August 14) in eNeuro.

Specifically, rats that had access to running wheels for six weeks starting at one month of age were better than their more-sedentary counterparts at remembering a box two weeks after they’d been taught to associate it with an electric shock. While the control rats froze—a classic fear response—the same proportion of times regardless of the box type or setting, the running rats froze much more often when placed in the original box.

“This is an animal study, but it indicates that physical activity at a young age is very important—not just for development, but for the whole lifelong trajectory of cognitive development during ageing,” Martin Wojtowicz of the University of Toronto in Canada tells New Scientist...

The freezing response used to assess the rats’ memory in this study depends on adult-born neurons in the hippocampus, and Wojtowicz and his colleagues found increased activity of these neurons, compared with neurons formed during development and with the adult-born neurons of rats that grew up without a running wheel. “Running is known to reliably induce increases in adult neurogenesis and enhance cognitive function in animals and in humans,” Wojtowicz tells Daily Mail. “This is the first evidence of such a long-term effect and a confirmation of an animal model of cognitive reserve.”

“The results suggest the amount of physical activity when we’re young, at least for rodents, has implications for brain and cognitive health—in the form of better memories—when we’re older,” Northeastern University’s Arthur Kramer, who was not involved in the study, tells New Scientist.