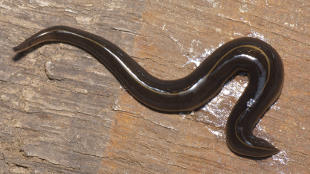 The arrival of the New Guinea flatworm, which was reported by an international team of researchers in PeerJ this week (June 23), is especially bad news. The species establishes itself quickly in new areas and feeds voraciously on native snails. “Once the New Guinea flatworm arrives in a new territory, and providing the conditions are right, it reproduces quickly,” study coauthor Jean-Lou Justine of the Muséum National d’Histoire Naturelle in Paris told The Huffington Post. “It quickly adapts itself to predate on local snails and...

Justine and his team showed that the New Guinea flatworm has also turned up in New Caledonia, Puerto Rico, Singapore, the Solomon Islands, and other small Pacific Islands to which it is not native. But finding the invasive species in mainland Florida is particularly worrying, as it has the potential to impact native invertebrate populations continent-wide. The flatworm, which grows to about two inches long with a dark back and pale belly, is considered one of the 100 worst invasive species by the International Union for the Conservation of Nature for its appetite for endemic snails.

The authors of the study suggest that the New Guinea flatworm may have been introduced to Florida around 2012, likely in soil or plant matter.