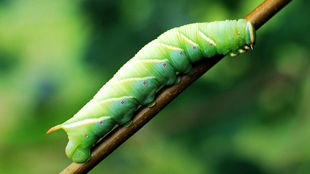 Nicotine is poisonous to most animals, but not to the tobacco hornworm (Manduca sexta). Now, researchers have shown that cytochrome P450 6B46 (CYP6B46)—a hornworm gene that helps metabolize nicotine—sends a small percentage of the nicotine consumed to the larva’s hemolymph, from which it is released into the air around the caterpillar and deters some predators in a kind of “toxic halitosis.” Their work was published in Proceedings of the National Academy of Sciences this week (December 30).

“It’s really a story about how an insect that eats a plant co-opts the plant for its own defense,” coauthor Ian Baldwin of the Max Planck Institute for Chemical Ecology in Germany told Live Science.

Baldwin’s team previously showed that predators were more likely to feed on hornworm caterpillars from tobacco plants expressing low levels of nicotine and that CYP6B46 expression is lower in these...

“A very intriguing aspect of this study is the really state-of-the-art methodology that was used to determine the fate of nicotine,” May Berenbaum of the University of Illinois at Urbana-Champaign, who edited the study for the journal, told Live Science. She added that the caterpillar’s defense is especially advantageous because it warns the predator of the larva’s toxicity without requiring the caterpillar to lose a limb.

“We’ve discovered the function of the gene CYP6B46 in the caterpillar because of a spider in the field,” Baldwin told io9. “This shows that nature is an important laboratory for discovering gene function.”