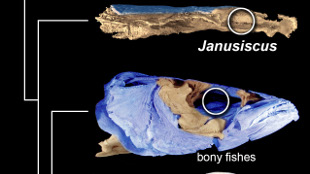 A fresh inspection of a 415 million-year-old fish skull first found in Siberia in 1972 revealed a cartilaginous surprise in its interior, challenging the conventional wisdom that the common ancestor of jawed vertebrates resembled fleshy sharks and not bony salmon, researchers from the University of Oxford and Imperial College London reported this week (January 12) in Nature.

Embedded in rock, the partial skull roof and brain case looked from the outside like they belonged to a bony ray-finned fish. According to new 3-D images the researchers generated with X-ray computed tomography (CT) scans, the skull’s inner features also include canals that can sense changes in surrounding pressure—typical of bony fish. But other features, like the placement of blood vessels in the brain case located above and between the jaws, looked more like the morphology of cartilaginous fish such as sharks and rays. The unexpected combination...

The double nature of the Janusicus schultzei skull contributes to a recent reimagining of ancient aquatic ancestors. Species predating the split between bony and cartilaginous fish 420 million years ago were previously thought to be cartilaginous and shark-like, but the new data suggest that “the last common ancestor of the two groups had lots of bone,” study coauthor Sam Giles of Oxford told LiveScience. “So rather than sharks being primitive, sharks are actually very highly evolved in their own way, and just as highly evolved as we are.”