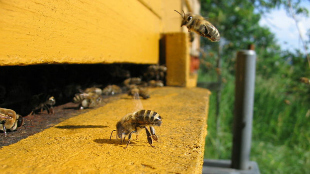 WIKIMEDIA, BJORN APPELThere were nearly a quarter fewer honeybee deaths during the 2013-2014 winter than occurred during the previous winter, and deaths were “notably lower than the eight-year average total loss,” according to a survey from the Bee Informed Partnership. “It’s better than some of the years we’ve suffered,” Dennis vanEngelsdorp, a director of the partnership and an entomologist at the University of Maryland, told The New York Times. But the death count of nearly one out of every four bees “is not a good number,” he said. “We’ve gone from horrible to bad.”

The survey, including more than 7,000 beekeepers across the U.S., found that nearly 24 percent of their colonies perished over the winter. That’s down from about 30 percent the year before but up from 22 percent in 2011-2012. Apiarists considered a loss of roughly 19 percent to be acceptable this year, meaning that this past...

In the same statement, Jeff Pettis, a coauthor of the survey and a research leader at the Agricultural Research Service (ARS) Bee Research Laboratory in Beltsville, Maryland, said it’s unclear why bee colonies fared a bit better this winter, but that many factors play a role, “such as viruses and other pathogens, parasites like varroa mites, problems of nutrition from lack of diversity in pollen sources, and even sublethal effects of pesticides combining to weaken and kill bee colonies.”