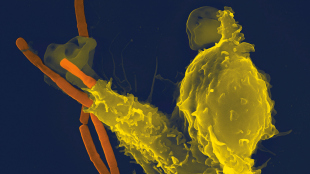 WIKIMEDIA, VOLKER BRINKMANNThe exceptional ability for the anthrax bacterium (Bacillus anthracis) to inject its toxin into host cells has made it an appealing Trojan horse for cancer therapies. In the latest advance, Bradley Pentelute of MIT and his colleagues piggybacked two so-called antibody mimics that target cancer-causing proteins onto the anthrax toxin to sneak them into cancer cells. “Anthrax toxin is a professional at delivering large enzymes into cells,” Pentelute told MIT News.

“This work represents a prominent advance in the drug-delivery field,” Jennifer Cochran, an associate professor of bioengineering at Stanford University, told MIT News. “Given the efficient protein delivery Pentelute and colleagues achieved with this technology compared to a traditional cell-penetrating peptide, studies to translate these findings to in vivo disease models will be highly anticipated.”

Pentelute’s study, published in ChemBioChem this week (September 22), is not the first to look to anthrax for cancer treatment potential. Several years ago, for instance, researchers developed an anthrax toxin that would only kill cells in the presence of a protein that’s common among cancer cells. Others have looked to the toxin produced by the bacteria as a cancer treatment itself.