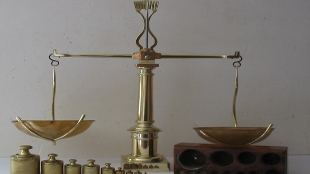 There's a secret war going on, and the future of science is at stake. The battle rages over the definition of "kilogram." Like many standards of measurement, the definition of a kilogram harkens back to scientific days of yore, when researchers were just beginning to empirically grasp the composition of matter. Since 1889, the kilogram has been defined as the mass of a certain platinum-iridium cylinder, called Le Grande K, that is housed at a sealed and guarded vault in Paris. In order for the cylinder to weigh exactly a kilogram, it must be taken out and cleaned according to strict rules. Invariably, such a process adds and subtracts millions of atoms—from cleaning products and simply handling the object—affecting the precise mass of Le Grande K. Given the evolution of our knowledge regarding the atomic nature of matter, many researchers believe a more precise definition of...

In 2005, scientists from the US National Institute of Standards and Technology along with collaborators in Europe pointed the way towards two possibilities—the Planck kilogram and the atomic kilogram. The atomic kilogram is defined by the mass of approximately 370 million cubed carbon-12 atoms. Defining the Planck kilogram is much trickier, requiring a working knowledge of quantum mechanics and special relativity, a massive and expensive piece of machinery, and considerable skill in mathematics.

Nonetheless, in 2006, the International Committee for Weights and Measures, a shadowy France-based organization that ensures uniformity in weights and measures, voted to adopt the more esoteric Planck kilogram definition on the advice of the five researchers who first identified these two most plausible options for redefinition.

In a recent opinion piece for The Chronicle of Higher Education, Georgia Institute of Technology mathematics professor emeritus Theodore Hill wonders why. Hill reasons that the atomic kilogram is much easier for more people to visualize and to teach, left to conjecture because of the secret nature of the International Committee for Weights and Measures—observers are not allowed at meetings of the group, and its decisions are not detailed for the public—he blames the decision to adopt the Planck kilogram on a fascination with quantum physics and a preference for method that requires more funding, equipment, and personnel among those who made the decision.

"The kilogram conundrum presents a unique opportunity for science professors and teachers to actively participate in determining the scientific legacy we leave to the next generation," Hill wrote. "It is not too late to tell the Committee on Weights and Measures and the National Institute of Standards and Technology which definition you prefer. Without such participation, the Planck kilogram will win by default, and that, in my opinion, will drive yet another wedge between science and society at large."