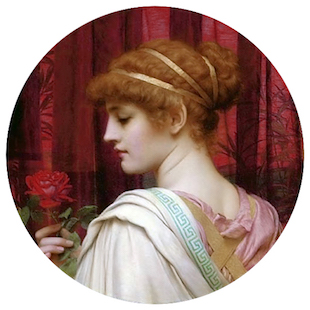 “Chloris - A Summer Rose” by John William GodwardWIKIMEDIA, ART RENEWAL CENTER MUSEUMScientists have long known that people with red hair have a higher risk of developing skin cancer. Now, researchers from the Wellcome Trust Sanger Institute in the U.K. and colleagues have found that people who develop a form of skin cancer and have the melanocortin 1 receptor (MC1R) gene variant—linked with red hair, freckles, and pale skin—harbor a greater number of mutations in their melanoma tumors, the researchers reported today (July 12) in Nature Communications.

“We have known for a while that there is an association between these [genetic] variants that cause red hair and increased risk of melanoma,” study coauthor David Adams of the Wellcome Trust Sanger Institute told The Guardian. “What this really does is show at least a contributing factor to that is more mutations.”

Ultraviolet (UV) light—like that from the sun—can damage DNA, and previous research suggested a skin pigment found in “redheads” allowed more UV to pass through. But the current study found that the MC1R variant increased the number of both UV-linked and non-UV–linked mutations, suggesting high-energy light damage isn’t the only mechanism at work in these cancers.

“This important research explains why red-haired people have to be so careful about covering up in strong sun,” Julie Sharp, head of health and patient information at Cancer Research UK, which helped fund the research, said in a statement. And it’s not just redheads who should be careful—“people who tend to burn rather than tan, or who have fair skin, hair or eyes, or who have freckles or moles are also at higher risk,” Sharp added.