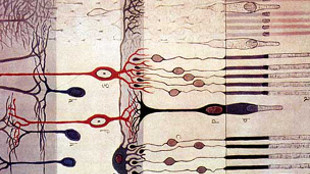 A team of researchers at the University of Manchester enabled blind mice with advanced retinal degeneration to see by delivering the gene for a light-sensing protein into nervous cells within their retinas, according to a study published last month (July 30) in Current Biology.

“This is the most effective example yet of the use of genetic therapy to treat advanced retinal degeneration,” Robin Ali, who studies gene therapy at University College London and was not involved in the work told New Scientist.

Researchers have previously used virus-based gene therapies to replace lost or defective genes in rods and cones, the photoreceptor cells of the retina. But for the present study, the team set its sights on ganglion and bipolar cells, which transduce signals from rods and cones into electrical signals sent to the brain. By delivering the gene for the light-sensing pigment, rhodopsin...

“The treated mice could discriminate black and white bars, but only ones that were 10 times thicker than what sighted mice could see,” Robert Lucas, study coauthor and geneticist at the University of Manchester told New Scientist.

Lucas added that the virus they used to deliver the gene is approved for use in humans, which means trials in humans could begin in the next five years.