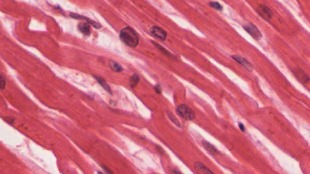 WIKIMEDIA, MAKLUMAT IANJUTThe mammalian heart has a slight capacity for regeneration—about one percent of cardiac muscle cells turn over each year. Although such cells are of big interest to scientists developing cardiac therapies, their identity has remained mysterious. Researchers reported in Nature this week (June 22) that they have finally pinned down these proliferating cardiomyocytes in mice.

“For decades, researchers have been trying to find the specialized cells that make new muscle cells in the adult heart, and we think that we have found that cell,” Hesham Sadek, the senior author of the study and a researcher at UT Southwestern Medical Center, said in a press release. “This cell does not appear to be a stem cell, but rather a specialized cardiomyocyte, or heart muscle cell, that can divide, which the majority of cardiomyocytes cannot do.”

Previous studies suggested that the progenitor cells likely live in a hypoxic...

The researchers observed an annual rate of cardiomyocyte production of 0.62 percent, which is pretty much in line with previous estimates (although there has been considerable debate on the topic). Some labs are seeking to tap into the regenerative capacity of the human heart to repair damage after cardiac events, such as heart attacks.

“Now we have a target to study,” Sadek said in the statement. “If we can expand this cell population, or make it divide more, then we can make new muscle cells. This is what this cell does naturally, and we can now work toward harnessing this ability to make new heart muscle when the heart has been damaged.”