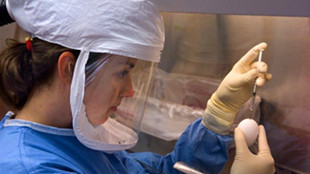 The new policies have been released in the wake a controversy over bird flu research that began in 2011 after scientists announced that they had made a virus in the lab that could pass between mammals. Researchers on the bird flu virus, H5N1, voluntarily halted their work until last month to give the community time to come up with rules for conducting the research safely.

One of the documents comes from Health and Human Services (HHS) and deals directly with what types of H5N1 research the agency will fund. Top officials from the HHS and the National Institutes of Health described the new criteria, which are based partly on a meeting held in December by the HHS, yesterday...

According to the new rules, the agency will fund research that expands H5N1’s functions only if the virus could conceivably naturally evolve these new abilities. The research should be “reasonably anticipated to generate information that will ultimately advance public health,” and there should be no safer alternative way to find the same information, the officials wrote in Science.

A second document, a draft policy released by the Office of Science and Technology Policy at the White House, addresses research areas believed to “pose a significant threat with broad potential consequences to public health and safety, agricultural crops and other plants, animals, the environment, materiel or national security.”

Government agencies already use special criteria to review research proposals in these areas, but the draft policy would mandate that federally funded institutions reevaluate the safety of their life science research as well. The document is open for public comment for 60 days.

The HHS policy should only affect “a handful” of labs in the United States working with H5N1, ScienceInsider reported. The White House document could affect a few hundred labs.