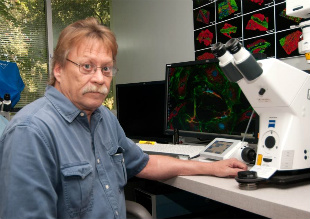 NATIONAL HIGH MAGNETIC FIELD LABORATORY/FLORIDA STATE UNIVERSITYMicroscopist Michael Davidson of Florida State University (FSU) in Tallahassee, whose images have appeared on everything from scientific papers to neckwear, died last month (December 24). He was 65.

During his time at the National High Magnetic Field Laboratory at FSU, Davidson and his team of more than 25 lab members (and 30 microscopes) developed several imaging techniques. In the mid-2000s, his collaboration with Eric Betzig and Harold Hess on photoactivated localization microscopy contributed to work that led to Betzig’s jointly receiving the Nobel Prize in Chemistry in 2014. “[Davidson] had a very big role in sparking the whole thing and enabling us to bring it to fruition,” Betzig told The New York Times this week (January 12).

Davidson told The Scientist in 2006 that, with his trainees, he was “trying to generate baby Picasso microphotographers” who could produce images that were aesthetically pleasing as well as scientifically illuminating. By 2012, Davidson had turned his lab at FSU into a successful powerhouse for live-cell imaging, recruiting technicians, often with little lab experience, to become expert microscopists. “At my age, I don’t need more papers,” he told The Scientist. “I need to give something back, and that’s my way of doing it.”

Davidson is survived by his wife, a brother, a daughter, three stepsons, and two grandchildren.