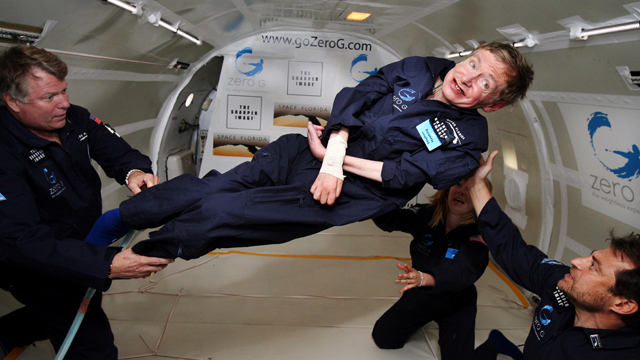 WIKIMEDIA, JIM CAMPBELL/AERO-NEWS NETWORKStephen Hawking died today (March 14) at his home in Cambridge, England. He was 76.

Hawking was known in the scientific community for his work on black holes and relativity, but he was also beloved by the public for his science books including A Brief History of Time and his appearances on popular television shows, such as The Simpsons and The Big Bang Theory. He was also outspoken about artificial intelligence and humanity’s yearning to explore.

Born in 1942 in Oxford, England, Hawking was later urged by his father—a researcher in tropical medicine—to pursue biology and medicine. But Hawking did not think those fields quantitative enough for his liking so he took on the study of mathematics and physics instead. After attending the University of Oxford for his undergraduate degree, Hawking went to the University of Cambridge for a PhD, when he was diagnosed...

In a 2013 documentary called Hawking, he said, “keeping an active mind has been vital to my survival, as has maintaining a sense of humor.”

ALS left Hawking bound to a wheelchair and unable to speak without the help of a voice synthesizer. Still, the disease did not keep Hawking from thinking about the universe differently than anyone had before. Lawrence Krauss, a theoretical physicist at the Arizona State University and a friend and colleague of Hawking, tells NPR that the British physicist discovered something “truly remarkable” at a young age—that, theoretically, some kind of particle could radiate out of black holes, an idea that ran counter to what physicists expected from gravity.

“That radiation is now called Hawking radiation,” Krauss told NPR in 2012. “And it changed everything about the way we think about gravity.”

As his ALS progressed, Hawking had to work harder to communicate his ideas. But that might have contributed to his mental prowess, Kip Thorne, a physicist at Caltech who frequently collaborated with Hawking, tells NPR. “It was because of this handicap that he developed new ways of thinking,” Thorne says, “new ways of wrapping his brain around things that enabled him to out-think anybody else in the field.”

Hawking’s passing, famed astrophysicist Neil deGrasse Tyson wrote on Twitter this morning, has “left an intellectual vacuum in his wake. But it's not empty. Think of it as a kind of vacuum energy permeating the fabric of spacetime that defies measure.”

He is survived by his children, Lucy, Robert, and Tim.