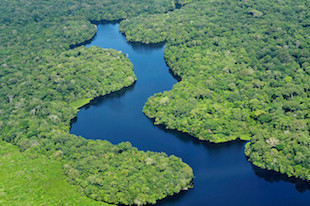 Amazon rainforestFLICKR, NEIL PALMER/CIFORThe world is losing species at an alarming rate. Researchers at the United Nations Environment Programme World Conservation Monitoring Centre in the U.K. and colleagues have found that 58 percent of the world’s land—home to more than 70 percent of the human population—has lost more than 10 percent of its biodiversity, placing it below the “safe” limit “within which ecological function is relatively unaffected,” according to a study published last week (July 14) in Science. Human society depends on these ecosystems for everything from crop pollination to waste decomposition.

“This is definitely a situation where the precautionary principle needs to be applied: we can’t afford to wait to see the long-term consequences of degradation of natural ecosystems,” ecologist Owen Lewis of Oxford University, who was not involved in the study, told BBC News.

The 10 percent safe-level cutoff is based on the Biodiversity Intactness Index, a measure of how abundant populations of different species are relative to their preindustrial levels, as detailed in the Planetary Boundaries framework (first published in 2009 and updated in 2015).

Not all scientists agree that setting hard limits is a good idea. “We don’t know what the safe limit is. We shouldn’t even try to find that out,” ecologist Erle Ellis of the University of Maryland, Baltimore County, told Discover’s The Crux. “Our goal is not to change the planet up to its safe limits.”

Others say the study still provides a valuable contribution to quantifying biodiversity loss. “Unless we really convey . . . the implications of that biodiversity loss for human well-being, for livelihood, then we can’t really expect to be able to explain to decision makers why they should be paying money to conserve biodiversity,” ecologist Tom Oliver of Reading University in the U.K., who was not involved in the work, told The Verge.