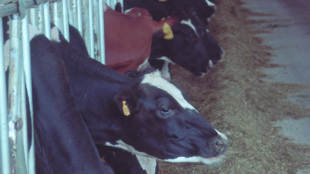 WIKIMEDIA, BOB NICHOLS, USDA NATURAL RESOURCES CONSERVATION SERVICEOf 30 antibiotics added to animal feed, 18 pose risks to humans by potentially exposing people to antibiotic-resistant bacteria in foods. That’s the conclusion of research conducted by the U.S. Food and Drug Administration (FDA), recently analyzed by the Natural Resources Defense Council (NRDC). The FDA “is an agency that has repeatedly found, since the 1970s, that these drugs pose a risk to human health, but it has not done anything meaningful with those conclusions,” Avinash Kar, a lawyer for NRDC, told The New York Times.

By requests through the Freedom of Information Act, the NRDC obtained documents of FDA reviews of antibiotics in animal feed dated 2001 to 2010. According to a press release from the NRDC: “None of the 30 antibiotics would likely be approved as new additives for livestock use if submitted under current FDA guidelines, because drug...

The Washington Post reported that the FDA has been planning to withdraw approval for some animal antibiotics since 1977. “But for decades, the agency took no action, even as the NRDC sued in recent years, trying to force it to follow through.”

Last year, the FDA asked pharmaceutical companies to voluntarily change the indications for their antibiotic products so that farmers would use them only in sick animals, rather than to bulk them up. “The FDA is confident that its current strategy to protect the effectiveness of medically important antimicrobials, including penicillins and tetracyclines, is the most efficient and effective way to change the use of these products in animal agriculture,” the agency said today in a statement to reporters.

According to Wired’s Superbug, “the obvious important point made by this report is that compounds are being used in agriculture about which federally contracted scientists—usually a conservative bunch—have raised repeated concerns. But what is also important. . . is precisely that those concerns were raised over years.”