According to a US Food and Drug Administration (FDA) report released last week (October 2), antibiotics sold for use on l 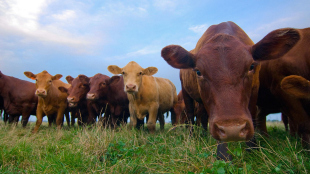 WIKIMEDIA, RYAN THOMPSON/US DEPARTMENT OF AGRICULTUREivestock rose 16 percent from 2009 to 2012, despite concerns that overuse of antibiotics on farms contributes to drug resistance.

The New York Times (NYT) pointed out that cephalosporin sales rose, even though the FDA has targeted these medically important antibiotics in particular with special restrictions. According to the NYT, cephalosporin sales rose 8 percent in 2012, “confirming advocates’ fears that the agency’s efforts may not be having the desired effect.”

Earlier this year, the agency initiated a voluntary program for pharmaceutical companies to change the labeling on antibiotics in an effort to curb farmers’ using the drugs to beef up livestock. Environmental and consumer advocacy groups have said the initiative does not go far enough to restrict use...

Last week (September 29), California Governor Jerry Brown vetoed a bill that would establish rules similar to the guidelines set by the FDA. The bill would have banned the use of antibiotics for growth promotion and required a prescription for other uses. Critics of the bill said its passage would continue to allow for disease prevention—an application they note allows for overuse of the drugs. “Antibiotics should be used on the farm only for the treatment of sick animals, for a limited period of time, as antibiotics are used in human disease treatment,” Elisa Odabashian, the director of the West Coast Office and State Campaigns for Consumers Union, said in a statement praising Governor Brown’s veto.