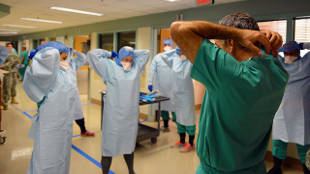 FLICKR, ARMY MEDICINEThe ongoing Ebola outbreak has put the World Health Organization (WHO) in the spotlight, and according to a report issued this week (July 7) by an independent panel of public-health experts, the agency “does not currently possess the capacity or organizational culture to deliver a full emergency public health response.”

Specifically, the panel found that the WHO is underfunded, slow to respond, and too dependent on “good diplomacy.” The report said that the agency took too long to declare a public health emergency in West Africa—in August 2014, after more than 1,000 Ebola-related deaths—and specifically called out Director General Margaret Chan for lacking “independent and courageous decision making.” Chan previously acknowledged that she should have declared the Ebola situation a public health emergency sooner than she did.

The panel suggested that the WHO likely shied away from challenging local governments for fear of the economic and trade...

“The recommendations outlined by the independent panel should give WHO the mandate it needs to lead the global response to future health crises,” Jeremy Farrar, director of the Wellcome Trust, told The Guardian. “The support of the global community is also crucial if we are to avert another catastrophe on the scale of Ebola.”

But Joanne Liu, president of the international arm of Doctors Without Borders, is reserving judgement for now. “The question is how will this translate into real action on the ground in future outbreaks?” she posted on Twitter.