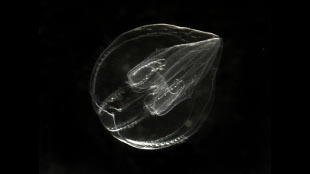 Sponges (phylum Porifera) are simple, sessile organisms traditionally considered to be descended from the earliest animals. But starting in 2008, a series of studies rocked the base of the animal tree, suggesting that ctenophores (comb jellies) were the ancestral model instead. Yesterday (November 30), an international group of researchers published a reanalysis of phylogenetic data in PNAS that reinstated sponges on the animal kingdom’s earliest branch.

The researchers argued that the analytical methods used in three previous ctenophore studies were inappropriate and led to inaccurate conclusions. “How do we explain the evolutionary jump necessary to evolve a complex animal with brain and muscle from the single celled and colonial condition observed in our more-distant eukaryotic relatives?” study coauthor Davide Pisani from the University of Bristol said in a press release.

The research team re-examined the three datasets using models with different frames of reference and a more-complex...

“Our results offer a simple solution to the problem of animal origin: ctenophores are not the first animals,” said Pisani in the press release. “The sponges are.”