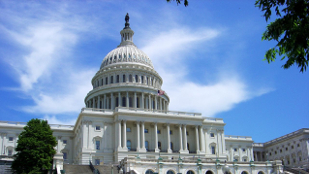 WIKIMEDIA, KMCCOYWith last November’s midterm elections, Republicans regained majorities in both the US House of Representatives and Senate. This turn of events led many science advocates to fear that the 114th Congress would not be friendly to science (and, therefore, federal research budgets). To assuage this fear, Senator Rand Paul (R-KY) and Representative Lamar Smith (R-TX), penned an essay entitled “No, the GOP Is Not at War With Science” in Politico Magazine this week (January 12).

“To remain a world leader, the United States must ensure that our investments are funding not just any science but the best science,” the legislative duo wrote. “Unfortunately, in recent years, the federal government has awarded taxpayer dollars toward research that few Americans would consider to be in the national interest.”

In true GOP fashion, Paul and Smith go on to decry what they perceive as governmental wastefulness in the research funding...

“Congress has a responsibility to ensure that taxpayer dollars are spent wisely and are focused on national priorities,” Paul and Smith wrote in Politico. “In the new Congress, Republicans, the party of limited government, should propose legislation to eliminate the funding of wasteful projects—and focus on smart investments instead.”

Yesterday (January 14), Ben Corb of the American Society for Biochemistry and Molecular Biology (ASMBM), wasted no time in dismantling the Politico piece an ASBMB Policy Blotter post. “The point is when it comes to science and outcomes, the enterprise is built on questions and not answers,” the ASBMB public affairs chief wrote, “and we must allow researchers to follow where their findings take them and not be fearful their findings will take them to a place that Congress doesn’t want to fund.”

Corb didn’t specifically defend any of the funded projects that Rand and Smith deemed wasteful, but he highlighted the legislators’ hypocrisy. Citing Paul’s past criticism of National Institutes of Health grants—one of which helped fund the development of a condom that is safer and more effective at slowing the spread of sexually transmitted diseases—and Smith’s support of an over-budget and under-delivering multibillion dollar military aircraft program, Corb questioned the lawmakers’ ability to identify worthwhile funding opportunities. “Neither Paul nor Smith have a particularly successful track record in citing valuable research or the proper use of taxpayer dollars,” he wrote.

Corb is skeptical of the Republicans’ claims in support of science. “If this is life with a GOP not at war with science,” he wrote, “I am fearful for the days when the battle begins.”