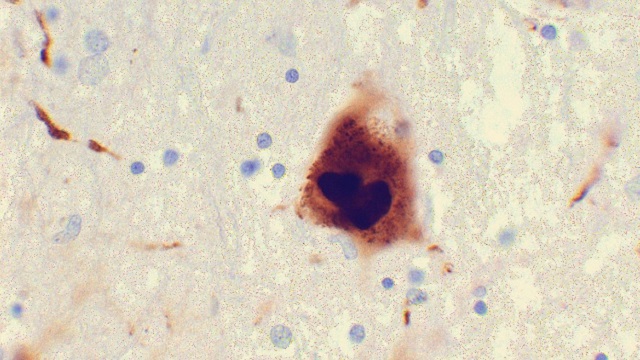 Photomicrograph of a region of substantia nigra in a Parkinson’s patient showing Lewy bodiesWIKIMEDIA, SURAJ RAJANA growing body of evidence points to an intimate relationship between the gut and the brain—both in health and disease. In presentations at the Society for Neuroscience meeting this week in Washington, D.C., researchers discussed recent findings that support a link between gastrointestinal tract health—and the microbiome, in particular—and neurodegenerative diseases such as Parkinson’s and Alzheimer’s.

Comparing the gut microbes of mice with Alzheimer’s-like pathology and healthy controls, Harpreet Kaur of the University of North Dakota and colleagues found noticeable differences in microbiome composition. Treating the diseased mice with probiotics decreased gut leakiness and inflammation, which had been elevated in these animals, and boosted memory performance.

In a separate study, Ishita Parikh of the University of Kentucky and colleagues took a similar approach, but instead of comparing the microbiomes of diseased and...

Another neurodegenerative disorder with links to gut health is Parkinson’s disease, with recent research revealing the presence of Lewy bodies within cells of the gastrointestinal tracts of animal models. At the conference, Doris Doudet of the Vancouver Coastal Health Research Institute and colleagues report that exposing rats to β-sitosterol glycoside (BSSG), a neurotoxin known to cause Parkinson’s-like symptoms in lab animals, leads to elevated levels of CD68, a marker of inflammation, in the gut. “Inflammation in the lining of the gut may be indicative of Parkinson’s disease development as much as brain inflammation,” Doudet says in a press release.

A big question now is which comes first—the symptoms in the gut or the brain—says Erwan Bezard of the University of Bordeaux’s Institute of Neurodegenerative Diseases. Injecting Lewy bodies purified from deceased Parkinson’s patients into the brains or guts of monkeys, he and his colleagues found that either treatment can cause Parkinsonian pathology in both tissues—namely, inflammation in the gut and neuronal death and α-synuclein aggregates in the brain—after two years, Bezard described at the conference. “So you have the pathology capable of coming from the gut to the brain and going from the brain to the gut,” Bezard says. “Today, we are left with the question of the chicken and the egg—we don’t know where it starts.”

Another open question is how the microbiome is involved in this link between the gut and the degenerating brain. One possibility is diet. For example, Lap Ho of the Icahn School of Medicine at Mount Sinai presented in vitro data showing that valeric acid, a metabolite of fiber, interferes with the aggregation of α-synuclein and the formation of fibrils, suggesting that “diet-gut microbiome interactions may contribute to susceptibility and/or resilience to Parkinson’s,” he says.