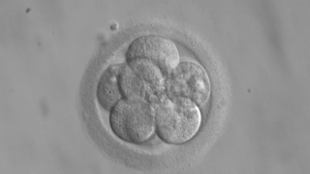 An eight-cell human embryo, three days after fertilizationWIKIMEDIA, EKEM: RWJMS IVF PROGRAMGiven advances in synthetic biology, researchers can now use stem cells to create human tissues, organs, and other approximations of early developmental structures. These recent innovations also raise ethical questions that may not be adequately answered by the self-imposed 14-day rule that has governed research on embryos for decades. That rule prohibits experiments using embryos older than two weeks post-fertilization, and resulted from the facts that researchers could only keep embryos alive for 14 days in the lab and that, after 14 days, embryos begin to develop the rudiments of a nervous system.

Now, Harvard scientists who pioneered some of the advances that allow for the creation of what they’ve dubbed synthetic human entities with embryo-like features (SHEEFs), are calling for a rethink of the 14-day rule. Embryoids are balls of pluripotent stem cells that begin to...

“Here we argue that these and related experiments raise more foundational issues that cannot be fixed by adjusting the 14-day rule, because the framework underlying the rule cannot adequately describe the ways by which synthetic human entities with embryo-like features (SHEEFs) might develop morally concerning features through altered forms of development,” the researchers wrote in an article published in eLife yesterday (March 21). “We propose that limits on research with SHEEFs be based as directly as possible on the generation of such features, and recommend that the research and bioethics communities lead a wide-ranging inquiry aimed at mapping out solutions to the ethical problems raised by them.”

Coauthor John Aach, a Harvard geneticist, told The New York Times that a fresh consideration of the ethics surrounding SHEEFs is compelled by the fact that researchers are going beyond coaxing stem cells into loosely coordinated balls of human embryonic cells and may soon be able to create more advanced organoids, such as beating hearts or rudimentary brains that may be capable of sensing pain. “We’re going to have to get a lot of input from a lot of quarters,” he said. “The problems are just too big.”

Aach, George Church, and their colleagues have argued that the 14-day rule should be replaced by more specifically targeted ethical guidelines that delineate boundaries for research on specific embryonic structures synthetic biologists can create. Church told Scientific American that he and his colleagues liken the 14-day rule to a stop sign at the end of a research road. What is now needed, he said, is a perimeter fence surrounding experiments on SHEEFs to prevent scientists from straying into unethical territory.

“I absolutely support this,” Cambridge University biologist Magdalena Zernicka-Goetz told NPR’s Shots. “The time is right to begin discussion of these issues in a forum that includes scientists and has a wide representation of society.”