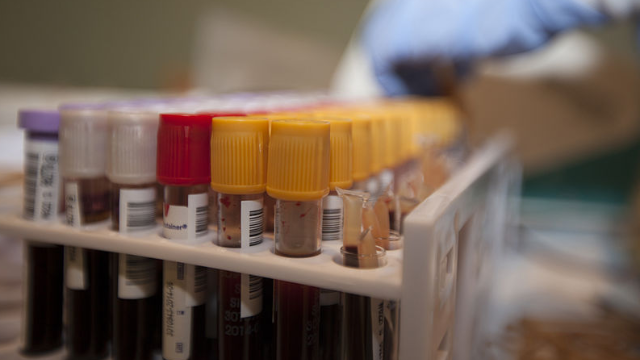 WIKIMEDIA, LCPL AUSTIN SCHLOSSERResearchers in Japan and Australia have developed the first blood test to detect amyloid-β protein buildup in the brain, one of the earliest hallmarks of Alzheimer’s disease. The findings, published on Wednesday (January 31) in Nature, show that measurements of the protein and its precursors in the blood can predict neural amyloid-β deposition and could pave the way for a cheap and minimally invasive screening tool for the disease.

“This study has major implications,” Abdul Hye of King’s College London, who was not involved in the work, tells the BBC. “It is the first time a group has shown a strong association of blood plasma amyloid with brain and cerebrospinal fluid.”

Current methods to identify amyloid-β buildup in living people are limited to costly and sometimes highly invasive procedures, such as brain imaging with a PET scanner and spinal cord fluid extraction. So Katsuhiko...

Using immunoprecipitation and mass spectrometry, the team isolated and characterized amyloid proteins in the blood from a cohort of 121 people in Japan spanning a range of cognitive function, from normal to developed Alzheimer’s. They showed that blood test results could predict amyloid-β levels in the brain with about 90 percent of the accuracy achieved using PET scanning. A repeat of the approach with a validation cohort of 252 people in Australia confirmed the blood test’s performance.

Such a test could one day be used to detect early signs of Alzheimer’s in people with no obvious symptoms, study coauthor Colin Masters of the Florey Institute in Melbourne tells reporters (via The Guardian). “I can see in the future, five years from now, where people have a regular checkup every five years after age 55 or 60 to determine whether they are on the Alzheimer’s pathway or not.” He adds, “If a person knows they are on this pathway well before the onset of any cognitive impairment some would want to alter their lifestyles.”

However, James Hendrix, director of Global Science Initiatives at The Alzheimer’s Association, a nonprofit funding Alzheimer’s research, cautions that the test is still long way from reaching the market. “It’s good to see this type of study advance, as we desperately need noninvasive and low-cost markers for Alzheimer’s disease,” he tells Scientific American. “But still, at this point it is not ready for prime time.”