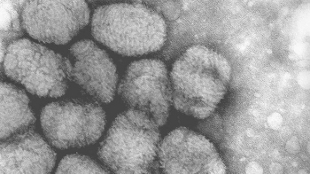 VariolaCENTERS FOR DISEASE CONTROL AND PREVENTIONAlthough smallpox was declared eradicated from the human population in 1980, some researchers have implored the World Health Assembly (WHA), the World Health Organization (WHO)’s governing body, to hold off on destroying the last known live strains of the variola virus, which causes the disease. A trio of scientists, led by Inger Damon of the US Centers for Disease Control and Prevention, argued in a PLOS Pathogens opinion published yesterday (May 1) that because synthetic biology makes it possible to recreate the virus, more research on vaccines is necessary.

“Certainly the current capabilities of synthetic biology and the availability of multiple variola virus genome sequences in the published literature make these scenarios more worrisome in the 21st century and also make the feasibility of ultimate final destruction of variola virus, itself, problematic,” Damon and her coauthors wrote.

Two high-security labs, one in the U.S. and one in Russia, still maintain live variola virus.

Some officials—including D.A. Henderson, the researcher who led the WHO’s global smallpox eradication campaign—argued that it’s time to get rid of the remaining stocks of live variola virus and other potential bioterrorism agents, such as anthrax. “Let’s destroy the virus and be done with it,” he told the Associated Press. “We would be better off spending our money in better ways.”

The WHA is set to decide whether or not to destroy the variola stocks sometime this month. The assembly has repeatedly delayed the decision in the past.