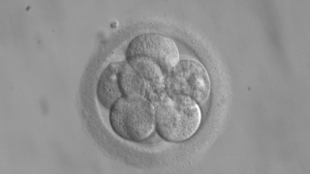 Normal eight-cell human embryoWIKIMEDIA, RWJMS IVF PROGRAMJust more than a month after MIT Technology Review reported on the imminent publication of a paper in which researchers describe editing human embryos using the CRISPR/Cas9 system, investigators from Sun Yat-sen University in Guangzhou, China, report their work editing human tripronuclear zygotes—nonviable early embryos that had one egg nucleus and two sperm nuclei—in an April 18 Protein & Cell article. The Sun Yat-sen team used CRISPR/Cas9 to cleave the endogenous β-globin gene, which is mutated in patients with the blood disorder β thalassemia, but observed some off-target effects.

Study coauthor Junjiu Huang told Nature that he and his colleagues were surprised by the number of off-target effects they observed, including some in remote locations in the genome. If the system were to be applied to edit the genome in normal embryos, “you need to be close to 100%” on target, Huang...

“I believe this is the first report of CRISPR/Cas9 applied to human pre-implantation embryos and as such the study is a landmark, as well as a cautionary tale,” stem-cell researcher George Daley of Harvard Medical School told Nature. “Their study should be a stern warning to any practitioner who thinks the technology is ready for testing to eradicate disease genes.”

Last month, experts in the field called for a moratorium on such research. “In our view, genome editing in human embryos using current technologies could have unpredictable effects on future generations,” Edward Lanphier, chairman of the Alliance for Regenerative Medicine, and his colleagues wrote in a Nature commentary. “This makes it dangerous and ethically unacceptable.”

“This study reaffirms the reasons that a pause is needed on in vivo human gene editing studies,” stem-cell researcher Paul Knoepfler of the University of California, Davis, wrote at his blog. “I feel like I need to have more time to read this paper carefully and to learn more about how the work was done before coming to more concrete conclusions as to whether it is acceptable from an ethical perspective.”