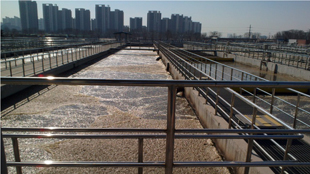 Wastewater treatment plant in ChinaYI LUO, NANKAI UNIVERSITYMany genes can cause antibiotic resistance in bacteria, but New Delhi metallo-beta-lactamase 1 (NDM-1) is especially dangerous because it allows microbes to destroy beta-lactam antibiotics, which are typically one of the last lines of defense against drug-resistant infections. Now, researchers have found NDM-1 in wastewater and sludge from two treatment plants in China. Their work was published in Environmental Science & Technology Letters earlier this month (December 4).

Researchers from Rice University in Houston, Texas, and from Nankai and Tianjin Universities in China sampled wastewater and sludge that had been treated by chlorination in wastewater treatment plants in northern China. They performed PCR on the samples and showed that NDM-1 was present—the water contained more than 1,000 gene copies per milliliter and sludge contained 40 million to 60 million copies per mL. The scientists also isolated a bacterial strain carrying...

“It turns out that [the bacteria] transfer these genetic determinants for antibiotic resistance to indigenous bacteria in the environment, so they are not only proliferating within the wastewater treatment plant, they’re also propagating and dispersing antibiotic resistance,” coauthor Pedro Alvarez of Rice University said in a statement. “This calls for us to take a look at these breeding grounds for antibiotic-resistant bacteria and how we might be able to create better barriers than chlorination.”

The study “sounds a huge alarm,” University of Washington Professor of Allergy and Infectious Disease Jeffrey Duchin, who was not involved in the research, told Chemical & Engineering News. Duchin added that the more prevalent these resistance genes are in the environment, the more opportunity they have to spread. “It would be a disaster,” he said.