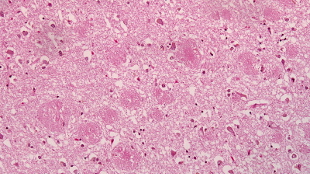 Amyloid plaque formations in the brain of a deceased Alzheimer’s patient. Wikimedia Commons, JensflorianDisturbed sleeping patterns could be a marker for the onset of Alzheimer’s disease, according to research presented this week (October 17) at the annual meeting of the Society for Neuroscience in New Orleans, Louisiana. The findings could lead to new ways to diagnose the condition and facilitate early identification of people at risk.

Alzheimer’s patients often experience changes to their sleep-wake cycles during the early stages of the disease. To find out if sleep disruption is linked to the development of Alzheimer’s, neuropsychologists at Dalhousie University in Halifax, Canada, used sleep quality data from a survey of 14,600 healthy people age 50 or older to produce what they called a sleep disturbance index. They found that people who reported trouble with sleep-wake cycles—particularly disturbed sleep and tiredness during the day—were more likely to be diagnosed with...

The results suggest that disturbed sleep could be an early marker for the brain changes that occur as the disease progresses—namely the accumulation of insoluble plaques made of amyloid-ß protein around nerve cells. But it’s also possible that disrupted sleep-wake cycles could contribute to disease progression. “Either that pathology is beginning to occur during aging, or sleep problems lead to accelerated Alzheimer’s pathology and disease,” David Holtzman, a neurologist at Washington University School of Medicine in St Louis, Missouri, who was not involved in the study, told Nature.

Holtzman’s group has already shown in a mouse model that normal sleeping patterns deteriorate following plaque formation. When the plaques were eliminated, sleep patterns returned to normal, suggesting that the accumulation of plaque in the brain causes sleep disturbances. It’s not yet clear if the same is true in humans, however.

Either way, the authors said that better characterization of changes in sleep regulation in older people could aid the early identification of those at risk of developing Alzheimer’s, and could suggest new ways to intervene at the earliest possible stages of the disease.