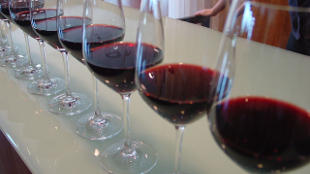 WIKIMEDIA, LOURDES CARDENALSmall amounts of resveratrol, the chemical in red wine and some berries that is purported to have cancer-fighting properties, may be more effective at preventing tumor growth than larger doses, according to researchers studying cancer-prone mice. A team of scientists from the U.K. and the U.S. published its results in Science Translational Medicine on Wednesday (July 29).

“For the first time, we’re seeing that less resveratrol is more,” team leader Karen Brown of the University of Leicester said in a statement. “This study shows that low amounts may be better at preventing tumors than taking a high dose.”

Brown and her team studied mice that had been engineered to spontaneously develop bowel cancer. After feeding the animals a high fat diet with varying amounts of resveratrol, the researchers found that a dose that was equivalent to a human adult consuming a large glass of red wine...

The new results are the latest in a long and complicated history of trying to pin down the anticancer properties of resveratrol in humans. “This research doesn’t mean that having a glass of red wine will reduce your risk of cancer because you can’t separate the resveratrol from the alcohol,” Julie Sharp, Cancer Research UK's head of health information, said in a statement. “And the increase in cancer risk linked to alcohol outweighs any possible benefits of the resveratrol.”