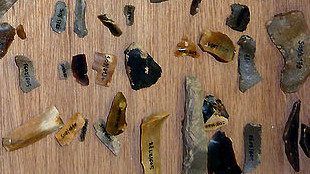 Mesolithic artifactsWIKIMEDIA, VANEILESBy reconstructing what they claim to be “a complete pre-agricultural European human genome,” researchers found evidence to suggest that ancient hunter-gatherers carried several variants associated with pathogen resistance in modern Europeans, and that the light skin of modern Europeans was not yet the norm in Mesolithic times. The findings, based on DNA from a 7,000-year-old human skeleton discovered in León, Spain, were presented in Nature this week (January 26) by investigators at the Institute of Evolutionary Biology in Barcelona and colleagues.

“The authors are drawing attention to the role of pathogens in pre-agricultural lives, and that is interesting,” Cambridge University’s Martin Jones, a professor of archaeological science who was not involved in the work, told The Guardian.

“It appears that the first line of defense against pathogens was already there,” added Wolfgang Haak, an ancient DNA researcher at the University of Adelaide in Australia, in...

Also interesting was that the researchers found that the ancient human carried ancestral alleles in several skin pigmentation genes, leading them to conclude that he likely had dark skin and light eyes. "You see a lot of reconstructions of these people hunting and gathering and they look like modern Europeans with light skin,” study coauthor Carles Lalueza-Fox told The Guardian. “You never see a reconstruction of a Mesolithic hunter-gatherer with dark skin and blue eye color.”