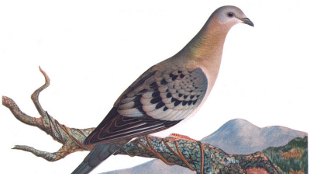 Working for an organization called Revive and Restore, which seeks to encourage practical attempts at de-extinction, Ben Novak, a former technician at the Ancient DNA Center at McMaster University in Canada, is collaborating with Beth Shapiro at the University of California, Santa Cruz, and George Church at Harvard to try to revive the extinct pigeon. First, Novak and Shapiro plan to sequence the genome of the passenger pigeon and compare it to that of the bird’s closest living relative, the band-tailed pigeon, to pick out the most important variations....

Armed with those data, Church’s lab plans to edit the genome from the germ cell of a band-tailed pigeon to transform it into that of a passenger pigeon. Then, using techniques pioneered at the Roslin Institute in Edinburgh, the team plan to implant this germ cell into another pigeon, likely a rock pigeon, where the researchers hope it will migrate to the gonads to produce sperm or eggs. Two of these birds will be mated to create a passenger pigeon chick. At least that’s the plan.

But even if the technical challenges can be overcome, some researchers are opposed to idea. For one, they argue that the precedent of de-extinction would make people complacent about conservation. But Novak disagreed. “It’s actually going to get people more interested in the idea of conservation, because of how cool it is,” he told Wired.

The project was discussed last week (March 15) at the TEDxDeExtinction conference in Washington, D.C., where geneticists, ecologists, bioethicists, and conservation biologists gathered to talk about the feasibility, merits, and risks of reviving extinct species.