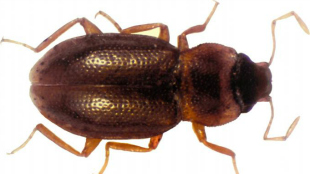 H. FREITAG, ATENEO DE MANILA UNIVERSITYIn a patch of forest on the campus of Ateneo de Manila University—smack dab in the second largest city in the Philippines—a group of students and a biology professor out on a sampling expedition managed to capture a new species of water beetle. They named the tiny insect, just about a millimeter in length, Hydraena ateneo.

“A new species from a highly urbanized megacity is always a surprise,” Hendrik Freitag, the faculty member, wrote in an e-mail to the International Business Times. “However, new discoveries of long-palped water beetles from the Philippines were likely as we only know very few of them, but the genus is expected to be very species-diverse.”

In a report published in ZooKeys this week (September 5), Freitag noted that although several new species are identified in the Philippines each year, most originate in the few remaining forests...

The find is titillating for urban naturalists seeking to make new discoveries. But in his paper, Freitag cautioned that the new identification of a beetle should not obscure the massive destruction of natural areas in the Philippines. “This should not lead to the illusion that the dramatic loss of biodiversity can be reversed,” he wrote.