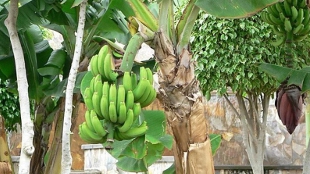 WIKIMEDIA, ROSENDAHLYou likely know the old trick of putting a ripe banana in a paper bag with an unripe peach to help speed the softening of the stone fruit. You might even know that the compound behind this phenomenon is ethylene, a gaseous hormone that aids in the ripening process and various other plant functions, such as defending against pathogens and regulating growth. But though the gas’s effects have been known for centuries, the plant genes that respond to ethylene have been a mystery. Until now.

A team of researchers led by scientists at the Salk Institute for Biological Studies has identified thousands of genes that are activated by ethylene. Joseph Ecker, the Salk plant biologist who led the team, said in a statement that the results—published Tuesday (June 11) in open-access journal eLife—open the door to developing new plant strains with slower or faster growth and...

Working with Arabidopsis thaliana, Ecker and colleagues used chromatin immunoprecipitation sequencing and transcript sequencing to track ethylene’s effects after it activated Ethylene Insensitive3 (EIN3), the transcription factor that acts as a master regulator of the ethylene signaling pathway. They found thousands of genes being switched on by ethylene and revealed that EIN3, which Ecker discovered and cloned in 1997, targets all other hormone signaling pathways in the plant. “Learning how plants coordinate hormone responses is essential to understanding their regulation of growth and development, be it in seed germination, fruit ripening, or responding to drought, insects, or pathogens,” Katherine Chang, first author on the paper and a researcher in Ecker’s lab, said in a statement. “In this way, mapping interconnections between the hormone pathways may have implications in agriculture.”