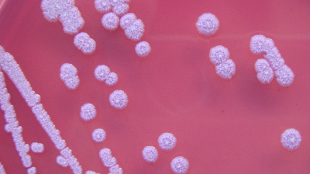 Colonies of B. pseudomallei WIKIMEDIA, GAVIN KOHThe bacterium Burkholderia pseudomallei, which can cause the serious and sometimes fatal disease melioidosis, was accidentally released from a high-security laboratory at the Tulane National Primate Research Center (TNRPC) in Louisiana, USA Today reported this week (March 1). While the details of the incident remain unclear, concern swelled when a US Department of Agriculture (USDA) investigator became ill and tested positive for B. pseudomallei just a day after visiting the lab in late January. As a result of this incident, work on select agents has been suspended, Tulane University said in a March 2 statement, according to ScienceInsider.

Among the numerous questions surrounding the safety breach are whether the USDA investigator was infected by B. pseudomallei or during a recent trip abroad, according to the Centers for Disease Control and Prevention. “Initial blood tests indicate that this investigator, who...

In addition to the USDA investigator, four rhesus macaques at the primate center have tested positive for the bacterium, two of which had to be put down, ScienceInsider reported. Two of the monkeys became ill in November, USA Today reported; investigators are as yet unsure how or when B. pseudomallei were released. “The fact that they can’t identify how this release occurred is very concerning,” Richard Ebright, a biosafety expert from Rutgers University in New Jersey, told the newspaper.