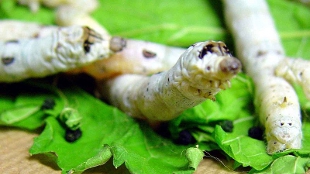 WIKIMEDIA, WEFTThe sex of a silkworm (Bombyx mori) is determined by a small RNA, not a protein as is the case in all other known instances of sex determination in animals. Researchers in Japan have found that the RNA molecule is made by a genetic precursor called Fem, which is specific to female silkworms. They reported their findings last week (May 14) in Nature.

University of Tokyo entomologist Susumu Katsuma led the team of researchers, which determined that the Fem-derived RNA degrades a similar RNA produced by a gene called Masculinizer. In moths and butterflies, individuals with paired Z chromosomes are male while animals with a W and Z chromosome are female. Fem is on the W chromosome, and Masculinizer is on the Z. When Katsuma and his colleagues inhibited Fem-derived RNA in developing female silkworm embryos male-specific splice variants of another...

Katsuma and his team established that Fem-derived RNA is a single factor that contributes to sex determination in silkworms, but the end goal is to find a way to produce all-male populations of the species. Male silkworms weave cocoons that contain more silk of a higher quality than those produced by females.

But this goal is far from being accomplished. Katsuma and his collaborators failed to reprogram female embryos into males by blocking Fem-derived RNA, and inhibiting Masculinizer was fatal to embryos with two Z chromosomes.