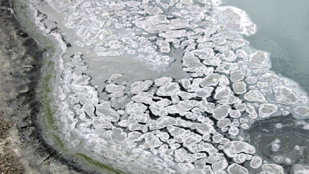 “It’s a mythological beast of a virus, but it actually exists,” virologist Ken Stedman told Nature of the virus hybrid his team discovered in a volcanic hot spring. Stedman’s team from Portland State University sequenced the DNA genome of the virus, and found that contained sequences encoding proteins from an RNA virus, according to their report published yesterday (April 19) in Biology Direct.

Boiling Springs Lake RNA–DNA hybrid virus (BSL RDHV, for short) is a single-stranded DNA virus with a circular genome, identified in acidic lake samples in Boiling Springs Lake in Lassen Volcanic National Park in California. The scientists realized they had something unusual when their characterization of viral sequences turned up the sequence for a protein from an RNA virus—encoded in its DNA. It’s not clear how two unrelated viruses that carry different forms of genetic...

Stedman proposed two possible scenarios. He hypothesized that if three different viruses—the RNA virus, the DNA virus, and a retrovirus—co-infected  a cell, the retrovirus’s reverse transcriptase could have converted the RNA virus’s genes to DNA and allowed recombination with the DNA virus. Or, a viral ligase could have attached the RNA and DNA genomes into one, which was then replicated as a single DNA genome.

Regardless of how it happened, the discovery of a hybrid virus opens the possibility of a much broader pool of recombination partners for the world’s viruses, with even distantly related viruses having the capability to combine their genetic material. How wide-spread such chimerism is among viruses remains to be determined, although database surveys by Stedman’s team suggest other possible RNA-derived proteins lurking in DNA genomes. Eugene Koonin, an evolutionary geneticist at the National Institutes of Health in Bethesda, Maryland, told Nature, “Stedman’s findings show that such recombination between diverse viruses indeed takes place and could be an important route of virus evolution.”