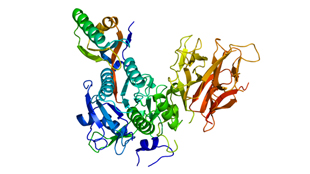 Structure of the PCSK9 proteinWIKIMEDIA, EMWA new therapy has shown promise for patients who take cholesterol-lowering statins but suffer the side effects of muscle pain and weakness. The results of a Phase 1 clinical trial published online today (October 3) in The Lancet demonstrated that delivery of an siRNA formulated in a lipid nanoparticle safely and effectively lowered LDL cholesterol.

Researchers at Alynylam Pharmaceuticals in Cambridge, Massachusetts, developed an siRNA that targets proprotein convertase subtilisin/kexin type 9 (PCSK9), a protein that typically binds and degrades LDL receptors, thereby increasing the levels of circulating LDL cholesterol. The siRNA, dubbed ALN-PCS, works by preventing the production of PCSK9 protein. Study participants who received the highest dose of ALN-PCS showed a 70 percent decrease in circulating PCSK9 protein, and an average of a 40 percent reduction in LDL cholesterol. Additionally, these participants experienced only mild adverse effects, which were comparable...

An accompanying commentary on the clinical trial, written by John Burnett and Amanda Hooper who are both scientists from the University of Western Australia, identified shortcomings, such as the small study size (32 participants) and the lack of female participants (only eight were women). Burnett and Hooper also discussed potential for off-target effects with the siRNA treatment that might be avoided by the use of other developing techniques, such as injected anti-PCSK9 antibodies.

But some scientists pointed out that this trial, though small, still represents proof of principle that siRNA therapeutics may someday be effectively used to treat disease. “It’s among the first demonstrations of RNA interference working in humans in a safe and tolerable way,” cardiologist Jean-Claude Tardif of the Montreal Heart Institute in Canada, who was not involved in the study, told Nature. “It’s very exciting.”