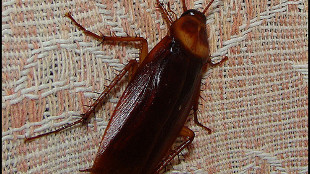 American cockroaches (Periplaneta americana) behave according the social expectations of a group, even though they may vary in individual levels of boldness, according to a study published today (February 4) in Proceedings of the Royal Society B.

Personality—defined as a persistent behavior such as sociability, aggression, or daring—had previously been shown in a variety of invertebrates such as spiders and octopi, but had not yet been demonstrated in cockroaches. Since the insects are social but not constrained to a leader-driven hierarchy, Isaac Planas-Sitjà and his colleagues at the Université libre de Bruxelles in Belgium decided to use P. americana to study the differences between individual and group personality.

The researchers glued radio frequency tags on more than 300 four-month-old male roaches sorted into groups of 16. Over the course of a week, the groups of light-averse insects spent most of their time in dark,...