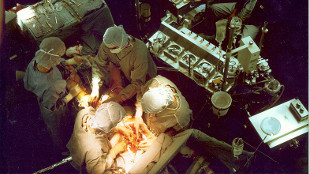 Wikimedia, NIHSurgeons at the New Cross Hospital in Wolverhampton, United Kingdom, performed the country’s first robotic-assisted heart surgeries using a $1.6 million remote-controlled robot, called Da Vinci, according to a news story published yesterday (October 22) by the BBC. In one of the robot-assisted surgeries, a young woman, Natalie Jones of Stourbridge, had a 1.3-inch hole repaired in her heart. In a second surgery, the robot repaired the valve between the left atrium and ventricle of a middle-aged man, Paul Whitehouse from Halesowen.

Finland and Sweden are the only other countries in Europe to perform robotic heart surgery, while surgeons in America performed their first robot-assisted heart surgery in 1999.

While conventional heart surgery requires opening the whole breastplate, surgery using Da Vinci requires only incisions between the ribs, and doctors say the surgery over-all is safer and the patients recover faster. “There is less pain and patients...

But, robotic surgery comes with a large price tag. The initial cost of the robot was nearly $1.6 million and its four arms, which cost more than $3,000 each, need to be replaced every 10 surgeries. Additionally, the two surgeons, Billing and Moninder Bhabra, went through thorough training in Finland beforehand.

Despite the price tag, the team plans to use Da Vinci to repair 30 mitral valves a year at New Cross. “I accept money is tight within the NHS [National Health Service], but we can't be left behind by the rest of the world in developing what we are doing in surgery and other aspects of health care," Bhabra told the BBC.