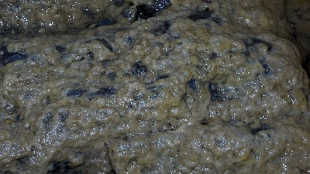 Rock snot in a river in SpainWIKIMEDIA, DAVID PEREZThe not-so-affectionately named “rock snot,” a freshwater algae species that can carpet riverbeds with globular mats, is becoming more common around the globe because environmental conditions are favoring its growth, not because it is being introduced into new watersheds, according to US and Canadian researchers.

The algae, Didymosphenia geminata, or “didymo” for short, has been cropping up in rivers in New Zealand, South America, Canada, and the United States in recent decades, and researchers had previously thought that it was an invasive species hop-scotching around the globe, introduced into new watersheds by human hands (or, more likely, boots). But Dartmouth College ecologist Brad Taylor and Max Bothwell of Environment Canada suggested that the more likely explanation was that didymo is native to all those rivers and is just blooming because of changes in environmental conditions, such as the climate...

“The paradox of didymo blooms in low-nutrient rivers is not really a paradox at all,” Taylor said in a statement. “However, the idea that low phosphorus can cause an algal bloom is hard for people to accept because we are all taught that more nutrients equal more algae.”

Given this new perspective and because didymo is a threat to salmon and trout in the rivers where it proliferates, Taylor and Bothwell suggested that the strategy of controlling the algae with chemical and fishing restrictions be replaced by regulations that mitigate environmental factors. “Correctly identifying an invasive species as either native or nonnative is important for developing sound policy, management and scientific research programs because effective responses depend on knowing whether the species' dominance is caused by ecological or evolutionary novelty, changes in environmental conditions that facilitate it, or both,” Taylor said.

The pair’s study follows on research published earlier this year in the Canadian Journal of Fisheries and Aquatic Sciences, indicating that didymo had been present, albeit rare, in some Canadian freshwater ecosystems where it had recently proliferated in its characteristic snot-like accretions. That paper also fingered climate change-associated environmental changes as likely culprits in bringing rock snot into more widespread prevalence.