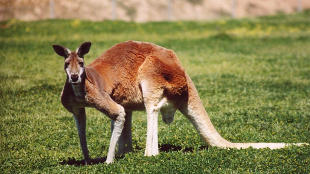 A red kangaroo (Macropus rufus)WIKIMEDIA, KEITH EDKINSA population-level preference for one hand over the other in a variety of manual tasks is a trait once thought unique to humans, 90 percent of whom are right-handed. But researchers have found hints of handedness in a variety of other animals, and scientists working in Australia now add another group to the list: kangaroos. Reporting their findings in Current Biology last week (June 18), a team from Saint Petersburg State University in Russia suggested that both eastern gray and red kangaroos consistently show a preference for their left forelimbs in a variety of manual tasks. “What we see in kangaroos is the same strength of handedness as we see in humans,” lead author Yegor Malashichev, a zoologist at Saint Petersburg State, told ABC Science. “But the direction of this handedness is opposite to humans. . . .They use...

Malashichev and his colleagues observed four marsupial species—eastern gray kangaroos, red kangaroos, red-necked wallabies, and Goodfellow’s tree kangaroos—as they groomed and fed in the wild. On a population level, the eastern gray and red kangaroos overwhelmingly used their left paws for all tasks, while the wallabies switched limbs based on the nature of the task. The tree kangaroos showed no preference for one side or the other. The authors of the paper suggested the bipedal nature of the two larger kangaroo species (tree kangaroos walk on all fours) as a possible determinate in making them handed. “The significant difference between bipedal and quadrupedal macropods reinforces [an] evolutionary link between posture and handedness,” coauthor Janeane Ingram from the University of Tasmania told ABC Science.

The findings have evolutionary implications because marsupials are a much more distant branch on the mammalian family tree. Some populations of primates, such as chimpanzees, have shown population-level handedness, fueling the hypothesis that a preference for one side of the body over the other may be a function of increased brain size, but the discovery of handedness in kangaroos suggests the preference may be shaped by some physiological or ecological trait, such as an upright posture or bipedalism. “We found a pronounced degree of handedness in an animal group only distantly related to humans,” Malashichev told The Verge.