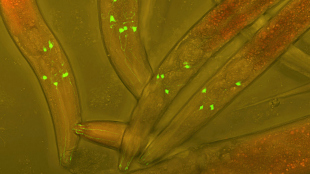 WIKIMEDIA, HEITI PAVESThe role of reactive oxygen species (ROS) on life span just got more complicated than previously thought. Scientists had already found evidence that the effects of ROS in mitochondria can be life span-extending or life span-shrinking, depending on ROS levels. Now, researchers show in PLOS Genetics this week (February 11) that ROS can also act in opposing ways depending on cellular location. In particular, upping ROS quantities in mitochondria of C. elegans increased the roundworms’ life spans, while in the cytoplasm this had the opposite effect.

Jeremy Van Raamsdonk of the Van Andel Research Institute’s Laboratory of Aging and Neurodegenerative Disease in Grand Rapids, Michigan, and his colleagues looked at the effect of ROS in different cellular compartments by selectively eliminating a C. elegans antioxidant gene in either mitochondria or cytoplasm, thereby boosting ROS levels.

“ROS are neither good nor bad. They have functional roles in the cell and it appears that it is crucial to have the right levels of ROS in the right location,” Van Raamsdonk said in a press release. “This means that treatments with antioxidants may need to be targeted to maximize beneficial effects and minimize possible detrimental effects.”