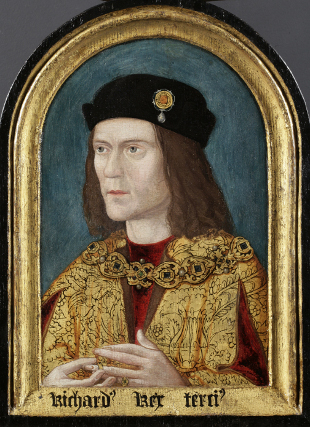 © SOCIETY OF ANTIQUARIES OF LONDON

Two years ago, archaeologists claimed to have found the remains of King Richard III beneath a parking lot in Leicester, England, the former site of the Greyfriars Abbey, where the king was buried in 1485. Now, scientists at the University of Leicester and their colleagues have examined DNA from the skeleton and two living relatives of Richard III. The genetic evidence upholds the king’s identity, and suggests historical infidelity in the Royal lineage, the researchers reported yesterday (December 2) in Nature Communications.

Although the skeleton showed signs of the wounds that led to the king’s death during the Battle of Bosworth, and its spine curvature was consistent with historical accounts referring to Richard as a “hunchback,” this DNA analysis has convinced some skeptics that the remains are indeed those of Richard III.

Study coauthor Kevin Schürer, a genealogist at the University of Leicester,...

The skeleton’s mitochondrial DNA perfectly matched the sequence of a living descendant of Richard’s sister, while another descendant had a mismatch in one base pair. The researchers also searched for similarities to the skeleton’s Y-chromosome sequences among male descendants of Richard’s ancestor, King Edward III, since Richard’s descendants were executed. They discovered no matches, suggesting that an illegitimate child may have entered the lineage sometime between the 14th and 18th centuries.

“We may have solved one historical puzzle, but in so doing, we opened up a whole new one,” Schürer told BBC News. But according to historian Anna Whitelock of the University of London who was not involved in the study, “royal succession has been based on many things in the past: ability to lead troops, religion, connections—not always seniority by royal blood,” she told BBC News.