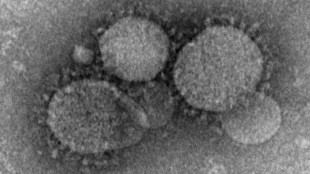 CDC, CYNTHIA GOLDSMITH, MAUREEN METCALFE AND AZAIBI TAMINDutch virologists who first identified a novel coronavirus isolated in Saudi Arabia that has killed 27 people and infected 49 have been accused of slowing research on the virus, ScienceInsider reported. But the research team, led by Ron Fouchier at Erasmus MC in Rotterdam, argues that, despite pursuing a patent on the virus sequence and host receptor data, they have shared it freely.

Fouchier and colleagues identified the virus after Ali Zaki, an Egyptian doctor working in Saudi Arabia, sent it to him. Zaki claims that he only sent the virus out of the country after giving it to the Saudi Ministry of Health, which did not show interest in it. The Saudi Ministry of Health said they had not heard of the new virus and that Zaki, who has been fired from the hospital and is now in Egypt, acted...

Now, according to the AFP, Ziad Memish, Deputy Health Minister in Saudi Arabia, complained to diplomats at the World Health Assembly annual meeting in Geneva that the Erasmus MC researchers were obstructing research on the virus, called the Middle Eastern respiratory syndrome coronavirus. “We are still struggling with diagnostics and the reason is that the virus was patented by scientists and is not allowed to be used for investigations by other scientists,” Memish said.

Margaret Chan, the World Health Organization’s director general, responded with seeming support, saying, “No IP [intellectual property] should stand in the way of you, the countries of the world, to protect your people,” the AFP reported.

Despite the accusations, however, Erasmus MC released a statement saying that the whole situation was a misunderstanding. “It is clear that all research institutions worldwide that want to carry out such research will receive the virus free of charge from Erasmus MC,” a press release said. “Indeed many research institutions already received the virus together with additional materials and information from Erasmus MC.”

Moreover, Erasmus MC virologist Ab Osterhaus told ScienceInsider that their patent application had not even been approved yet and that seeking patents on virus data is standard behavior that incentivizes pharmaceutical companies to develop vaccines.

Osterhaus added that his institution had not intended to snub Saudi Arabia and that Zaki was listed first on the patent. “We intended to share from the very beginning, and we did not understand initially that there were problems between Zaki and the Saudi government,” he told ScienceInsider.

Osterhaus said that Erasmus MC is writing a letter to WHO’s Chan to clarify his institution’s intentions for the virus.