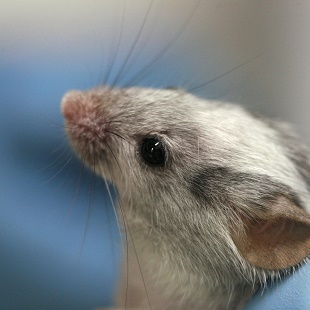 WIKIPEDIA, RAMARunning while watching moving patterns can restore vision to mice suffering ‘lazy eye’, or blindness in one eye, according to a study published this week (June 26) in eLife.

This form of blindness, known as amblyopia, is caused by a lack of visual stimuli early in life, as a result of a droopy eyelid, misaligned eye, or congenital cataracts. If left untreated, the lack of signals from one eye causes deficits in the visual cortex of the brain.

Michael Stryker and his colleagues from the University of California, San Francisco, recreated this condition in mice by sewing an eyelid shut for several weeks of the animals’ early lives. When their eyes were re-opened, mice were allowed to run on a “treadmill” of Styrofoam balls suspended on a stream of air, either with or without a visual stimulus.

Within a week, the group that watched moving patterns had...

“Neither locomotion alone nor visual stimulation alone promoted recovery,” the authors wrote in their paper. “These findings suggest that recovery is facilitated only in the neural circuits that are activated during running.”

Whether running has the same effect on the visual cortex of human brains is not known, “but we are designing experiments to find out,” Stryker said in a press release.

“What is amazing is the robustness of this phenomenon,” neurobiologist Massimo Scanziani from the University of California, San Diego, who was not involved in the study, told Nature News. “It’s powerful and highly reproducible, which is ideal for studying the mechanism.”