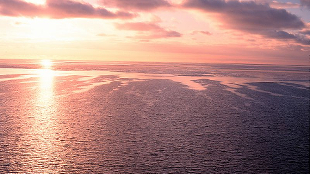 Sunset over the Ross Sea, AntarcticaWIKIMEDIA, NOAARussian diplomats have this week angered conservation organizations around the world by invoking a legal technicality to foil grand plans to protect vast swathes of the Antarctic Ocean, reported Nature.

With Antarctic marine ecosystems under increasing pressure from fishing and other human activities, several governments, backed by scientists and non-governmental organizations, proposed the creation of new marine reserves. One proposal involved banning fishing in an area covering 1.6 million square kilometers of the Ross Sea to create the world’s largest marine reserve, while the other would have created seven new reserves off Antarctica’s east coast.

The plans were up for consideration at a meeting of the Commission for the Conservation on Marine Living Resources (CCAMLR)—which controls fishing in Antarctica—held this week in Bremerhaven, Germany. All 25 members of the commission had previously agreed in principle to the plans, so there was...

But those hopes were dashed when the Russian delegation raised doubts about whether the CCAMLR actually has the power to create such reserves, and refused to agree to the plans. That means the proposals will have to be considered again at the organization’s annual meeting in Hobart, Australia, in October, though Russia’s stance leaves doubts about the chances for a green light there.

Andrea Kavanagh, director of the Southern Ocean Sanctuaries campaign, run by the Pew Charitable Trusts, told Nature that she was “frustrated and sad” at the outcome. “This objection from Russia is out of the blue,” she said. “It’s going to need some high level diplomatic outreach to Russia [to resolve].”