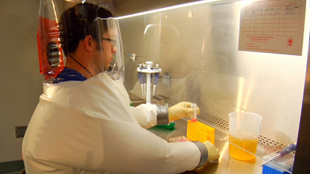 Following a year-long, worldwide moratorium on H5N1 research stemming from fears of a global pandemic after researchers showed that the avian flu virus could be spread among ferrets, scientists have released a new “molecular biocontainment” strategy for the safe study of deadly viruses. The protocol, detailed in a paper published Sunday (August 11) in Nature Biotechnology, involves introducing viruses to be studied to human lung cells, which inactivate the viruses.

“The question last year was whether the risk of altered bird flu escaping laboratories justified the science aimed at understanding the transmission of these viruses,” said Benjamin tenOever, a microbiologist at Mount Sinai, in a statement. “With our method, the possibility of human transmission is no longer a concern.”

The biocontainment method involves altering a virus’s genome to add a binding site for a specific human miRNA found in lung cells, miR-192, which can latch onto and...

The researchers claim that their approach can be used for all type A influenza viruses, including H5N1, an avian virus that has killed 360 people since 2003. The experimental protocol could also be used to study RNA viruses, such as Ebola and SARS. “It is clear that we can apply this technology to any virus,” said tenOever.