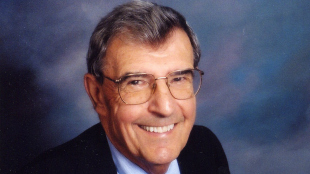 J. Robert Beyster, who founded the massive defense and technology company Science Applications International Corporation (SAIC), died December 22 at the age of 90. His legacy in the business world is as a champion of the employee-owned model.

“I know this sounds trite, but he was a real visionary in the business world. Economists would acknowledge the theoretical possibility (that employee ownership could boost productivity), but he actually showed, yes, this can be done,” Douglas Kruse, an economist at the school of management and labor relations at Rutgers University in New Jersey, told U-T San Diego.

Beyster was trained as a physicist, having earned a PhD from the University of Michigan in 1950. After working at Los Alamos National Laboratory, he launched what was then Science Applications in 1969 as a consulting firm. It grew into a multibillion dollar company that recently split into two.

Beyster is survived by his wife, three children, several grandchildren, and a sister.